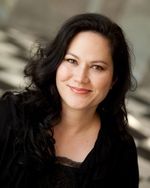 BLR: To begin, why don’t you tell us a little bit about your newest novella ‘A Vampire’s Salvation’?

VDP: The story’s a glimpse into an assimilated vampire’s daily routine, including the way he meets his “true mate” on the job. Although vampires still live in the shadows, many of them hope to be integrated into human society. Of course, there are those who’ll do anything to stop this. It’s this mixture of personal and global agendas that brings romance/sexual tension to the story, as well as a sense of suspense/high stakes.

BLR: You have such a wonderful flair for bringing characters and the moments they experience to life, what’s your secret to making them so life like?

VDP: What a wonderful compliment—thank you! I’m an avid reader and that’s what helps me the most. Creating well-developed characters is an amorphous skill—one I’m constantly working on—but it’s a bit of “I know it when I see it.” Unfortunately, the more I write, the harder it is for me to get fully immersed as a reader. So when it does happen, I’ll go back and analyze what the author did to get me there. I look at what language the author used, but also the way she structured her sentences or how much time she spent in the character’s head versus on dialogue, etc.

BLR: ‘A Vampire’s Salvation’ is a unique and thrilling vampire romance, what inspired it?

VDP: I started Jake and Frankie’s story several years ago; back then, however, Jake wasn’t a vampire! Even so, there was something about the two characters that stuck in my head, and when I decided I wanted to write a vampire novella, I thought--why not start with them? I liked the idea of a vampire trying to make life better through “official” channels rather than just street fighting. At the same time, it pleased me that Frankie’s professional agenda was to save the environment. Even in the midst of their own issues and suffering, these are two people who care about others and are willing to act in order to show it.

BLR: You’re also the author of ‘The Red-Hot Cops’ Series, could you tell readers a bit more about this series you have under the pen name Ava Meyers?

VDP: Not too long ago, I challenged myself to write an erotic romance, mainly because they’re selling so well and I wanted to give self-publishing a try. I wanted to write a series and when I thought about a plot device, writing about cops was the first thing that popped into my head. I confess I have a “thing” for guys in uniform, cops especially, and undercover cops most especially. I’m intrigued by the idea of a cop going to extreme measures to do his job. I wondered how far one would go to prove his loyalty to a bunch of criminals he’s trying to bring down. I pictured Viggo Mortensen’s character in the movie Eastern Promises and how he’d tatted up his entire body to fit the role he needed to play. I came up with the idea of a biker gang initiation and Ty, the hero of Copping To It, stood up, waved his arms, and took control.

BLR: I’ve read that you have a history within the law enforcement/judicial circle, how in the world did you get into writing such sweltering romances?

VDP: I’ve read romance since I was twelve and was an English major in college. The idea of writing a romance had been with me long before I became a lawyer. Even so, there was a part of me that just didn’t believe I could do it. Then I reached a point where practicing law was no longer satisfying me and frankly, I didn’t know what else to do. I’d tried every creative outlet I could think of (acting, singing, painting, drawing, quilting) but was either not talented enough to do it well or just not interested enough to keep doing it. I finally decided to write a book just to see if I could. As soon as I started writing, I loved it. I became obsessed with learning about craft and meeting other writers, and the whole thing snowballed from there.

BLR: I have to ask! Who or what inspired ‘Copping to It’, those boys in blue are simply too yummy?

VDP: No one in particular inspired the series or those characters. (That’s my story, and I’m sticking to it! :)) However, as a prosecutor I had the honor of meeting many dedicated cops, people who risk so much in order to serve and protect. To some degree, I met them as “every day regular people,” and I’m fascinated by how being a cop doesn’t just stop at the end of the work day. It’s part of who these people are, and I wanted to explore some of that through my writing.

BLR: Do you have any upcoming projects we can look forward to reading soon?

VDP: Do I ever! My first mass-market novel comes out on May 3, 2011. It’s called Chosen By Blood, and it’s Book 1 in the Para-Ops Novels by Berkley Publishing Group. I also have a book coming out with Silhouette Romantic Suspense; Dangerous To Her launches in September of 2011. The following month, Book 2 in the Para-Ops Novels, Chosen By Fate, releases.

BLR: Obviously you have a wonderful knack for creating chemistry between characters, but what do you think makes for a really great romance not just in your own work, but in others as well?

VDP: Again, thank you! I think creating two characters that are kept apart by believable and dramatic circumstances is one way to create great romance. By forcing the characters apart, you’ll naturally highlight the ways they fight that distance. It’s the push-pull interaction and emotion between the hero and heroine that allows those characters to be revealed to the reader. It gets us in their heads and shows us how their thoughts and desires are often in conflict with their actions. It also enables us to see, in the end, what they’re willing to overcome for love.

BLR: Your novels are pretty erotically charged and I know a lot of authors have problems when it comes to writing sex scenes. What is your secret to creating these scorching scenes and do you ever say to yourself ‘I really hope my kids never see this!’?

VDP: It’s something I’m still struggling with! I’m a pretty shy and modest person by nature. I’d have a hard time saying some of the words I use in my stories. But when I write, I can definitely go somewhere completely outside myself. When I first started writing erotic romance, I could tell I was holding back. I kept having inner debates with myself about whether what I was writing was exploitive or irresponsible or damaging to any particular group in any way. I talked to a lot of authors I respected and I ultimately concluded that, regardless of my own inhibitions or probable judgment from others, I had stories to tell, stories that would entertain readers, stories that were ultimately about empowering women’s fantasies. I gave myself permission to hold nothing back and “just see” what I came up with. The stories hit a chord with readers and the more feedback I get, the more comfortable I am writing them.

BLR: When writing, do you have any particular habits or rituals?

VDP: Not really. I sort of fly by the seat of my pants. I like the idea of writing a few hours each day and then stopping to focus on other aspects of my life, but so far it hasn’t worked that way. I basically make time when inspiration hits.

BLR: You’d mentioned to me that ‘Copping to It’ had been one of your first attempts at writing a novella. What experiences can you share for new writers who are thinking about getting their work out there?

VDP: My biggest advice is to focus on the story first. It’s easy to be intimidated by the success of others or by the seeming implausibility of our goals. Instead, focus on what it is about your particular plot or characters that excites you and then ramp it up. Be bold. Constantly push things to the extreme. For most of us, we tend to play it safe, even in our writing, and when we give ourselves permission to take risks, that’s when magic happens.

VDP: Honestly, I’m a wife and mother trying to do what I love while constantly fighting insecurity and the demands of everyday life. I’m a bit intense and tend to jump feet-first into whatever I’m doing, yet I want to do everything well. I get overwhelmed by everything I put on my plate, but I still seem to add more everyday. No matter what I’m doing, some part of my brain is aware of all the other things that need to get done, too. But the thing that immerses me the most is my writing. Momentarily, I forget the demands of life and that’s what I hope to bring to my readers.

Thanks so much for having me on your blog, Wenj!


Thank you, Virna, for taking the time to stop by!
Interested in reading some of Virna DePaul's wonderful work? Be sure to check out these wonderful titles available through Barnes & Noble, Amazon and Smashwords:


A Vampire's Salvation | Copping To It | Cop Appeal
Posted by Wenj at 8:00 AM

Email ThisBlogThis!Share to TwitterShare to FacebookShare to Pinterest
Labels: interview

Thanks, Nina! I'm glad you enjoyed it!!

Great interview Virna! You are so inspiring.

Wow, thank you Suzanne! I appreciate that! :)

Oh! I LOVE A Vampire's Salvation! Jake is YUMMY *drool*
Great interview - thanks for sharing =D