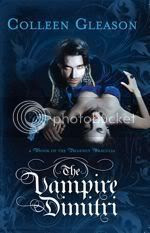 
*Novel provided by the publisher via NetGalley

Dimitri, also known as the Earl of Corvindale, should be delighted that the headstrong Maia Woodmore is getting married. His mortal ward and houseguest has annoyed—and bewitched—the Dracule nobleman too long, and denying his animal cravings grows more excruciating by the day.


Miss Woodmore's family has a rather…complicated history with the immortals and she herself possesses a keen sensibility far beyond mere women's intuition. Marriage will give her safety, respectability and everything else a proper young lady could wish for. Everything, that is, except passion.

In the looming battle between Dracule factions, all pretenses will shatter as Maia and Dimitri come together in an unholy union of danger, desperation and fiercest desire.

The Vampire Dimitri by Colleen Gleason is the second novel in the Regency Draculia series focusing on Dimitri, Earl of Corvindale. While the first novel in the series swept me away with the wonderful characters and thrilling romance, this novel fell a bit flat in comparison. Really, really, I tried to like this one and get in to the story because through it's predecessor The Vampire Voss I truly loved Dimitri and Angelica's sister the overly prim and proper Miai Woodmore. Together they seemed to be an ideal fit, but the reality and the illusion are very different things.

In fact, my biggest gripe about this book was the retelling of the first through the eyes of these two particular characters. It rehashed so much of the original plot line it felt like I was re-reading the first novel instead of something new. In truth, I saw a lot of the same conversations, situations and emotions that I already knew to have existed. I didn't need over 150 pages to put me back in to these characters lives, nor to relive what had already happened. In truth, if this novel would have started fresh from the end of the first novel, I think I would have been a lot happier. But, with the recap on top of a small portion of new story, I really felt like I never made any progress while reading.

Of course, that's not to say that I didn't like it, but honestly, I didn't love it like I did Voss' tale. The characters were just as I remember them: Dimitri-damaged, reclusive and essentially very shut down while Maia is strong, independent and head strong. And while I do like these characters, what I didn't see as much of previously was the annoying manner that Miai had in wanting everyone to accept her thought and opinions. I hate to say it, but in this novel I found her really hard to take and I found myself wanting to slap her myself. She's very self centered despite her desire to protect her siblings and I don't know, she just rubbed me the wrong way. Dimitri on the other hand, I found to be quite a sympathetic character. Seeing some of the events of his past through his eyes versus Voss' was interesting and really explained a lot about his personality. I came to really love him. But, the bickering between he and Maia quickly got on my nerves. It was very childlike, especially when it was gone in to in this amount of detail. On the peripheral it didn't seem quite this...agonizing.

The romantic aspect also wasn't quite as developed as it was previously. I felt that the connection was tenuous at best to begin with, though it seemed like the chemistry was far better from the point of view of the first novel. This fact definitely confused me a bit because I saw the same scenes with a completely different tone. It was just plain odd. As the story progresses however, the romance does begin to follow suit, but again, it was slow going.

Overall it was a good read, but definitely wasn't what I had been expecting nor what I had hoped it would be. Maybe the next installment, The Vampire Narcise will recapture the intensity and characterization of the first novel. In the meantime, it still definitely had it's moments.