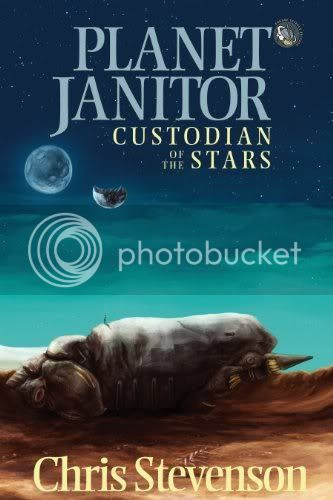 I once heard an inventor friend of mine use the words, “Planet Janitor“ in describing a company he wanted to form that purified water through ionization. He thought the name had an environmentalist quality to it. That was 15 years ago. He never formed the company, but I never forgot the company name--it had a catchy, unique ring to it.
Fast-forward 15 years--I tried to come up with Science Fiction tale that hadn’t been done before. I imagined some space travelers landing on a planet, wherein they ended up knee-deep in the bones of some giant alien species. The bone yard stretched for hundreds of miles in every direction.

The crew couldn’t fathom a catastrophe of such magnitude, a veritable genocide that seemed to wipe out the entire planet’s inhabitants. The most profound question amounted to what or who had caused such a global massacre. I imagined their ship was disabled upon landing, so they would eventually find out by unraveling a mysterious chain of events that would have them confront this unknown nemesis/killer. That idea stalled out for awhile.

A year later I read an article about the use of precious metals that were used in the construction of spacecraft, space stations and satellites. We’re talking about gold, silver, magnesium, aluminum, platinum and titanium. The article went on to propose that in the future, some lucky entrepreneur might be able to build a craft that could scoop up all of this wayward flotsam, and make a fortune with the reclamation. My mind wandered, thinking about asteroids that might contain precious metals, too.

It wasn’t until I put the three ideas together that I believed I had a plausible story arc. What if I had a crew who were adept at space trash salvage, but they had become so good at it that they mined rogue asteroids, and even ventured further out onto the spiral arm to visit small moons and planets. They’re notoriety would increase, and perhaps they might be hired on as private contractors to save some of earth’s eco-systems. They would use some special skills that involved pyrotechnics, chemicals and high-tech machinery. Give them an old Russian ore freighter to scout the solar system and wahla! Those were my environmentalists--my planet janitors.

It wasn’t too far of a leap to imagine that this crew might have one last big job to perform before the captain and crew retired, since they’d obviously become quite rich, and a little famous. Then it hit me. Take them on the boldness mission ever, further out than they’d ever gone before. Take them so far out that their cyro sleep would advance the age of earth’s inhabitants by 25 years--make their departure soul-wrenching, leaving loved ones and relatives behind.

That destination, of course, had to be the death planet I thought of upteen years ago. Blackmail the crew to get them there, sabotage their ship, give them no hope of ever returning, then assault them with the planetary killers. With no weapons, dysfunctional equipment, personality squabbles and betrayal, and dwindling resources, how could any crew manage to survive and make it back alive?

So, with that daunting plot, and in a vintage, old-school style voice and tone reminiscent of Robert Heinlein and Phillip Jose Farmer, I embarked on that journey and finished Planet Janitor Custodian of the Stars two years ago. It was the book that garnered my second agent. Since then it has been rewritten and edited so many times, I get the shivers thinking about it. It sold to Engage Books of Vancouver, Canada, to a wonderful publisher/editor/friend of mine, Alexis. They spared no expense in the layout and format, including 26 interior illustrations and a custom-painted full color wrap-around cover.

I often think of PJ as a cross between Starship Troopers and Robinson Crusoe on mars. I’ve written 17 other books besides PJ, but for some reason this one will remain very near and dear to my heart. I was inspired in the very beginning of my writing career by the late, great Poul Anderson, who became my mentor. I also took many lessons from Alan Dean Foster, and remain a friend and admirer of his to this day.


Planet Janitor is available at Amazon, in hardback and Kindle editions. The trade paperback edition will soon be released, as well.  You can purchase it here: Amazon
Planet Janitor also has its own website, courtesy of Engage Science Fiction: http://planetjanitor.com/Home.html

About the Author: Chris Stevenson:
Chris Stevenson has been a native Californian for most of his life, until recently moving to Sylvania, Alabama. His career has spanned such occupations as automotive mechanic and service manager, government security officer, and newspaper reporter and editor. At the age of 26 he discovered Twilight Zone Magazine and got the urge to write short stories. Shortly after, he entered the L. Ron Hubbard Writers of the Future contest and placed amongst the finalists. Since those early days, he has published two non-fiction books, sold five novels, numerous short stories to the major slick magazines, and hundreds of newspaper articles. The only thing he hasn’t published is a screenplay, which he doesn’t plan on drafting anytime soon. His fondest wish is to continue with his writing career and produce the ultimate breakout novel.


Chris  can be reached via email at: Stevenson_333@msn.com

Captain Zachary Crowe and the crew of Planet Janitor Corporation are adept at handling environmental clean-ups and close system jumps to collect precious ores and space trash. The problem is they have yet to complete an assignment without a mishap to add to their not so stellar record. Scraping the bottom of the barrel, Orion Industries contracts Planet Janitor for a clandestine operation that no one else wants, offering them more money than they could spend in three lifetimes. The mission entails a 12 light-year trip to a newly found habitable planet in the Tau Ceti system. The crew will lose 26 years on Earth due to the cryo jump, but that is the least of their problems. What they find on Tau Ceti will rattle their wits, test their courage, and threaten their very survival.