*Novel provided by the publisher for a honest review.

They are here. They ride. The Four Horsemen of the Apocalypse.

His name is Ares, and the fate of mankind rests on his powerful shoulders. If he falls to the forces of evil, the world falls too. As one of the Four Horsemen of the Apocalypse, he is far stronger than any mortal, but even he cannot fight his destiny forever. Not when his own brother plots against him.

Yet there is one last hope. Gifted in a way other humans can't-or won't-understand, Cara Thornhart is the key to both this Horseman's safety and his doom. But involving Cara will prove treacherous, even beyond the maddening, dangerous desire that seizes them the moment they meet. For staving off eternal darkness could have a staggering cost: Cara's life.

Larissa Ione does it again! Eternal Rider, the debut novel in Ione's newest series, The Lords of Deliverance, based within the same world has her previous best selling Demonica series, is action packed and sexy as Hell. Never has fighting the Apocalypse been so hot! And like any other novel that Ione has put out, you can expect wonderfully complex and sinfully delicious characters as well as a pace that provides an action packed thrill ride complete with a wonderful new twist to the well known lore of the Four Horsemen of the Apocalypse. If you loved Demonica then you'll love the super sexy Lords of Deliverance!
As always, the world building within this novel was first rate and those who loved the darkly passionate tones of the Demonica series won't be disappointed. But, Eternal Rider is so much more intense with plenty of violence, horror-like action and gripping suspense as the Horsemen struggle to keep the second Seal from breaking. And did I mention hot as Hell? Because the sexual tension within this novel was far more intense and electrifying then ever before. The atmosphere itself is oppressive as plagues break out over the world at the hands of Pestilence, the first of the Horsemen to fall and begin to usher in the Apocalypse. Truly, there is a no holds barred mentality within this novel as war is waged, a fitting element given that this novel follows the second Horsemen, Ares, who is destine to become War should Pestilence succeed in breaking his Seal. But, despite the dark, looming tones throughout the story, this book is in no way oppressive itself. Instead, it's utterly captivating and kept me on the edge of my seat and reading during every spare moment that I could find.

But, this could also be largely attributed to the wonderful characters! War has to be one of the sexiest, dominant males ever. His past is full of tragedy leaving him battle scarred in more ways then one and thus unable to truly open himself up to anyone. His inability to connect on even the most base level definitely tugged at my heart and had me instantly hooked. When he starts to develop feelings that he can't explain or control I really loved watching his struggle and even connected with it on some level. But, his prowess as a warrior and protector truly made him one damn sexy and drool worthy man! His need to protect Cara and take care of her was amazing to watch, even when it was the simplest of actions like remembering to bring her a pillow. Simplicity at it's best with the emotion behind the action speaking volumes where he cannot. This creates a great complexity that I also enjoyed seeing develop as he begins to tear himself in two with his desperate need to stay away from Cara, but at the same time needing to give in to weakness as be with her.

Cara is also a wonderful character. She's been abused and forced into so many corners throughout her life that you can't help but feel sympathy for her. And because of her past traumas and tragedies she comes off as quite a weak and timid character, and who could blame her. But, what I loved most about her is she was just such a paradox! After so much happening to her and all the things that she is forced to accept, things that would make anyone beg to be hauled away to the loony bin, she begins to exhibit this wonderful strength that I couldn't help but be awed by. As if to support how truly extraordinary she is, she becomes bonded to a Hell hound, creatures that by nature don't bond to humans. It seems that no one is exempt from the appeal of this woman, be it a hound of Hell, a Horsemen or me!

But, what truly makes this novel exceptional is the romance between these two seemingly opposite characters. Can you say OMFG? Steamy doesn't even begin to describe these two nor the tension between them that definitely had my 'hot meter' tripping at a solid 10.0! And Ione definitely out does herself with some creative and amazing sex scenes as well as the dynamics between characters. And while the relationship between Ares and Cara takes center stage, this wasn't the only relationship that i enjoyed. In fact, there is also a wonderful familial dynamic going on as well as the brothers, and Limos, support and connect to one another in ways that they couldn't with humans or demons. The shifting POV certainly helps build up this aspect of the story giving great insight into the connections and bonds that the other characters feel for one another. This is also evident with the connection between the Horsemen and their fallen brother Reseph, or now, Pestilence. Even though the dynamic morphs into something dark and evil, the underlying ties are still amazingly well developed making for even more intense battles and conflicts.

The writing style definitely draws you into the story as well as the thrilling and tortured lives of the characters involved. The fast pace is great paired with the rich complexity of the lore the Ione creates for the Horsemen perfectly melding it into the existing lore of the Demonica. But, make no mistake, this is a stand alone novel and readers who haven't read the previous series don't need to worry about being lost or confused. Like I said before, this is a new series within an old world with prior novels only serving to flesh out the story even more. But, while this story may be dark there are still a lot of wonderfully light and comedic moments sprinkled throughout showing the wonderful sense of humor of the characters. This helps to keep the novel from being a complete downer, instead making it seem more epic then disparaging.

This is definitely a wonderful beginning to a series that is sure to epic. I cannot wait to see the true scope and depth of this novel explored as just this first glimpse had me completely enthralled. Fans of paranormal romance and apocalyptic tales will love this novel and it's captivating Horsemen! 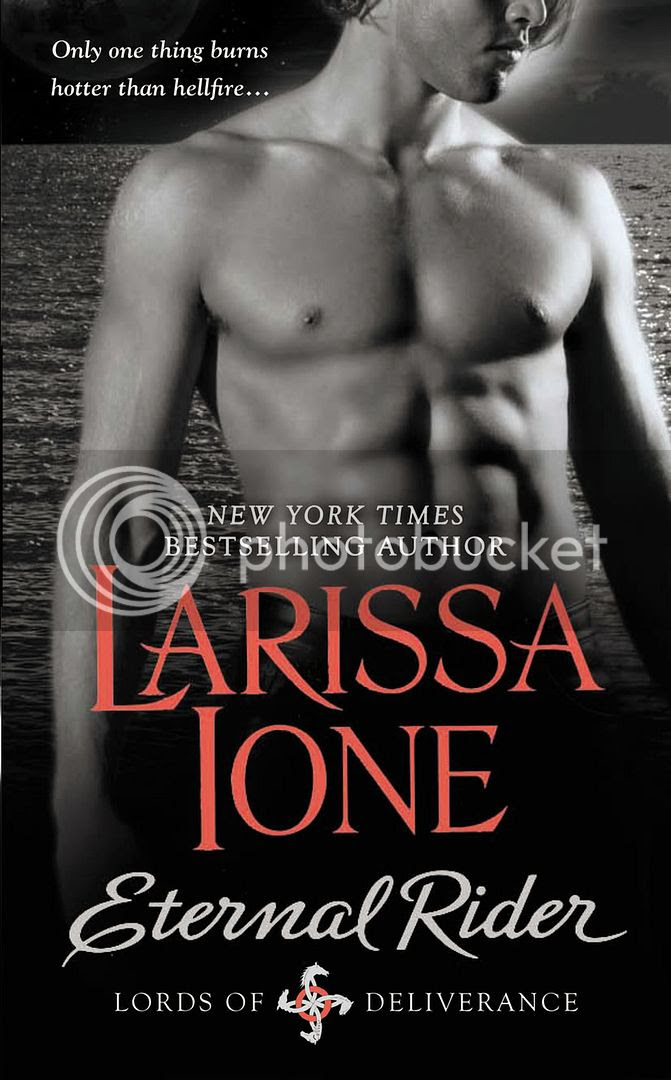 Giveaway:
Thanks to Grand Central Publishing, I have 3 copies of Eternal Rider to giveaway!
CONTEST RULES:
-US & Canada Residents Only
(No PO Boxes)
-Be a GFC Follower (New/Old)
To enter fill out this FORM. Contest ends 4/15/2011.

Thank you so much for this great giveaway!

Great review! Thanks for sharing!

I have to agree that War and Cara are a great individuals and as a couple!

Great review. I haven't read any of Larissa Lone's books, but based on your review I think I have to put her on my to-read list!

@PRSR - I know! I love when novels has such great characters that you can love either in or out of a relationship and truly this novel did this perfectly!

@litishajean - Your welcome! :D But, really it's GCP that's the true hero for sponsoring it! But, hey, I'm happy to take the credit ;)

I hope I win this...I would sooo love to read this. Thanks for the great review!