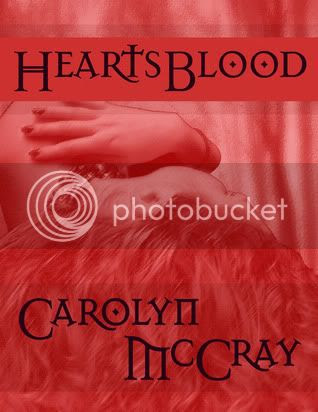 A woman of science. A man of magic. Hunted for their HeartsBlood.

Dr. SalistaCalon knew that she worked in a bad part of San Francisco, but nothing could prepare her for the horror that awaited her at the hospital. After her best friend is slaughtered, Salista’s only clue is a mysterious man dressed in leather. A man who claims to know not only the secret behind her best friend’s death, but the key to controlling a force that could rend both their worlds... Blood Magic.

Drawn into a world beyond her comprehension and control, Salista must choose between science and magic. Her mind and her heart. HeartsBlood...A love taken to its dangerous conclusion.

After reading several very positive reviews about Carolyn McCray's HeartsBlood, I was eagerly anticipating reading it. However, once I finally started to do so I couldn't hide the vast amount of disappointment that I felt as after the first 100 pages I could no longer shy away from the fact that I just really wasn't enjoying either the story or the characters and was thus forced to abandon the novel totally, making this a DNF (Did Not Finish) read.

So where did this novel go wrong for me? Well, from the very beginning I couldn't develop any connection to the characters. The initial chapters were a hodge-podge of chaos more focused on the medical setting then on the characters themselves. Not only that, but there was a very definite stiffness to the writing that set me off as well. It was more geared towards a medical text then a paranormal romance. When the action involving the actual premise of the novel finally did come to pass, I was hopeful that things would turn around. Again, I was disappointed by the chaotic writing and the inner dialogue, more of a diagnosis really, which managed to drag the scene on and on. In the end, I felt that the potential that this story held was destroyed by the inability to turn off the medical jargon and overly analytical inner workings of the main character.

Usually, even when I dislike something it's usually salvaged by my curiosity about the characters more then anything else. In fact, many novels I've been put off by have been saved by the writer's ability to make me care about them. I was hoping that that would be the case here and because of the characters I would come to be drawn into the story. Again, it just didn't happen. I even read far past what I could stomach simply with that hope pushing me on. As it was, I couldn't connect to the main character, the mysterious stranger, or the fiancee. In fact, I found myself down right disliking several of the characters because of how obnoxious and abrasive they were and therefore found no solice there.

I then left all hope for the story with the potential that the premise held, after all the synopsis sounded interesting which was the whole reason that I chose to review this novel in the first place. The idea was unique and intriguing and I liked the scientific take on things with the lingering promise of magic. In this regard, McCray definitely did bring the scientific atmosphere of the hospital to life. The medical basis of the plot was nicely developed, although, it seemed to take over the novel overshadowing everything else. From the medicinal aspect of the ER to the more clinical analysis of Sal's fiancee, it just all served to overpower the characters making them into walking, talking text books. When the magical aspect finally appeared, it just sort of fell flat under the more domineering science. The end result was a plot that was unfathomable with little practicality in the face of such an unbelieving heroine. When she does finally allow herself to ponder the possibility it comes off as being false under her stanch analytical mind making the actions seem at odds with the character.

In the end, I just couldn't bring myself to get into this novel. From the chaotic action scenes to the overly medical tone of the characters, I just couldn't connect to any of them despite the more then generous 100 pages that I tried. While this may appeal to some, evident by the rather glowing reviews out there, it just didn't hit the mark for me.

Disclosure of Material Connection: I am a member of the Book Lovin' Bitches Ebook Tours and a copy was provided to me by the author. Although payment may have been received by Book Lovin' Bitches Ebook Tours, no payment was received by me in exchange for this review nor was there an obligation to write a positive one. All opinions expressed here are entirely mine and may not necessarily agree with those of the author, the book's publisher and publicist or the readers of this review. This disclosure is in accordance with the Federal Trade Commission's 16 CFR, Part 255, Guides Concerning the Use of Endorsements and Testimonials in Advertising.