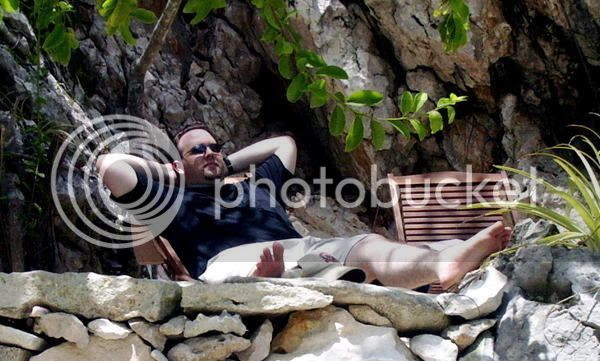 Welcome to Black Lagoon Reviews Jason! It's wonderful to have you stop by.

About Jason Beymer:
A permanent fixture at his local coffeehouse, Jason Beymer hunches over his laptop in a caffeine-induced frenzy, jowls slick with muse. He injects comedy into the urban and traditional fantasy genres like a squeeze of lemon into ice water: tart, yet refreshing. When not pounding on his keyboard, Jason worships at the feet of Ray Bradbury, and engages in an unhealthy obsession with Grace Park and Tricia Helfer.

2000 years after the Rapture, the world still sucks.

That's the tagline for my novel: Rogue's Curse. Wenj gave me a great review (4/5 Scars!), and the opportunity to say more about it. Here goes:

While robbing a tomb, Doban discovers the talisman responsible for the Rapture. It embeds itself to his skin and makes him the most wanted rogue in history. Now Doban must turn to the only woman who ever loved him—a woman he left to die in that same tomb—for help. Rogue's Curse is a dark comedy with tons of sex, monsters, palace politics, romance, humor and adventure.

Mainly the focus is on the relationship between Mona and Doban. What has happened in the two years since he left her to die in the tomb? How did she survive and escape? And most importantly, can they set aside their differences long enough to stop a second Rapture? At its heart, Rogue's Curse is about second chances, and whether or not we repeat past mistakes when presented the opportunity.

With Rogue's Curse I aimed to create a dark fantasy laced with laugh-out-loud comedy. I wanted readers to care about the characters and invest themselves in the twisting plot, while laughing obnoxiously. The book started as a serial for my Warcraft guild's amusement, but it blossomed from there. In our guild, Marginal Heroes, I always played a rogue, and I sucked. I was the one who touched all the dragon eggs, or agrroed the mob that slaughtered our group. With all the time spent running back to my corpse from the graveyard, I thought, "Jeez, there's a lot of untapped comedy in the fantasy genre."

Though the main character in Rogue's Curse is a rogue, I wanted to satirize other aspects of the genre as well: kings, princes, monsters, harems, religion, prophets, etc. I took each of these archetypes and twisted them. The king's harem was my favorite. Over 300 women wedged into a tight wing of the palace, competing for the king's attention = Major Volatility. All they needed was a spark to set them off. And that spark turned into my all-time favorite character to write: Lady Mumford.

Some readers have said I went way overboard with Lady Mumford. Reviewers mention my descriptions of her more than anything else in the book. When she enters the story, the king falls in love with her. This doesn't sit well with the Royal Harem. Here is a description of Lady Mumford from the king's perspective:

"His love’s eyes were slits, her brow wrinkled. She always looked like that, as if she spent her life in the grips of a perpetually painful bowel movement. Beautiful. Poets could devote a thousand sonnets to her facial contortions alone."

I also created my own race of monsters, called clovorts. Oompus is the first clovort you'll meet in the book. He stands 8 feet tall and weighs 600 pounds. Here's an excerpt describing his entrance:

"The clovort’s bull-like head quivered and his lips parted, revealing jagged yellow teeth. His face was bumpy, as if layered over solid bedrock. His bare, squat legs rippled with muscle at the calf, but were fleshy and gelatinous at the thigh. Oompus’s hoofed feet, obscured by long ankle hair, clopped against the floor, barely supporting the extraordinary weight of his naked frame."

I hope you will read Rogue's Curse and enjoy the comedy, as well as the fast-paced and twisting plot. If you have any comments, I'd love to hear from you: jason@beerandtv.com

In May, Lyrical Press will release my newest novel Nether, an Urban Fantasy/Comedy. Tagline: "One night in suburbia. One stubborn corpse. One golden opportunity." Follow me on Twitter (http://twitter.com/#!/beerandtv) and check my blog for updates leading up to release day.

Thank you, Wenj for the opportunity to guest post on your blog!

Two thousand years after the Rapture, the world still sucks.
The talisman responsible for the Rapture has embedded itself in Doban's chest, making him the most wanted rogue in history. Pursued by a biblical prophet intent on ripping the talisman out, Doban must seek help from the only woman who ever loved him--a woman he once left to die in a tomb. Can they let go of the past long enough to stop a second Rapture?

Read my review of Rogue's Curse here.
Posted by Wenj at 8:35 PM