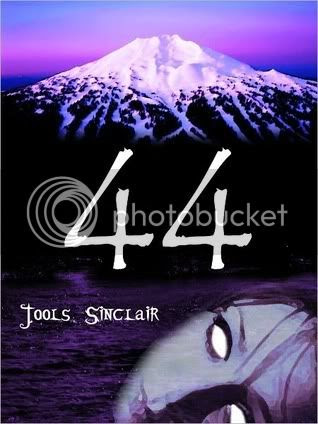 Last year after falling through the ice, seventeen-year-old Abby Craig woke up from death.

But she woke into a world she barely recognizes. She can’t see colors, memories have been erased, and her friends all hate her. And then there’s Jesse, who she loves, but who refuses to forgive her the one mistake she made long ago.

Just when she thinks it can’t get any worse, the visions begin. In them, she sees a faceless serial killer roaming the streets. While the police believe that there have been a lot of accidents in town lately, Abby knows differently. And she soon realizes that it’s up to her to find him.

But to stop him, she’ll have to confront more than just the killer. She’ll have to face something else that was lost in those dark waters. The truth.

In the tradition of Amanda Hocking, 44 is a thrilling paranormal romance mystery novel that keeps readers at the edge of their seats and glued to the very end. The ending will haunt you forever.

44 by Jools Sinclair is a wonderful paranormal mystery for young adults with all the suspense and plotting one would expect in an adult thriller. Wonderfully planned out with some nice twists and turns and endearing characters that are sympathetic and endearing, this novella may be short, but there is no lack in quality!

The lead character, Abby is a wonderfully adult character that was masterfully developed with great emotions and thoughts. She's somewhat independent, struggling to find herself and adjust to her 'new life' after a fatal accident in which she was finally revived some forty-four minutes later. Though she suffers through moments of depression and struggles with her frustration at no longer being able to lead the life she once did, she is seen as an outcast among her peers, but instead of sulking she mourns her old life and moves on finding her place on the fringes. And close at hand is her best friend and love interest Jesse, a character that I really loved. His relationship with Abby is dynamic and organic with great turmoil and tension that is perfectly relatable to young and old readers alike. Throughout the tension mounts, but it is never questionable the devotion that both characters have to one another and this close knit bond is marvelous to see change over the course of the story. But, more impressive is the relationship between Abby and her older sister Kate. No doubt Kate has a tough task raising her younger sister and then coping with all the repercussions of her near fatal accident. When these mysterious visions of a serial killer start effecting her little sister I was really impressed that she so easily believed her. Though, more important was the connection between these two. There's something of a protective quality about their relationship showing a strong familial bond, as well as a wonderful closeness where each fully divulges to the other. Kate never sees Abby as being a child and accepts her as an adult and never considers her sister a burden which is a unique attribute that I especially enjoyed reading.

The world was also wonderfully created with a great atmosphere that was at once somewhat disconnected while being fully realized. This seemed to perfectly mirror Abby's character showing a world where things are far from the normal life of a teenager. But, at the same time, I really loved the diversity ranging from the crime hunting side where Abby delves in to her visions to catch a killer with her sister and still maintain a realistic high schooler appeal of a young lady trying to find her place and herself. The locale was nicely described as well, creating a nice backdrop for the tension and journey of the story.

Sinclair also did a marvelous job with the storyline and still maintaining a lot of 'character' based content in parallel to the varying directions of the plot line. There's a great mystery surrounding the mysterious serial killer, the visions that Abby experiences and the truth surrounding her accident which she remembers very little about. Everything really ties together very nicely and there are several twists along the way eliciting a lot of wonderful emotions making this something of a roller coaster, especially towards the end. But, after reading the story from beginning to end, I did end up with a few little niggling issues that seem to conflict with how the story ends. I know I'm leaving this extremely vague, but to go in to any amount of detail will completely spoil the ending. What I am willing to say is that while I found a few of the occurrences in hindsight to be odd or completely off, it doesn't change my opinion of the story as a whole.

In the end, this was a great, short read that I really enjoyed. There were some great characters that were able to bring forth a lot of emotion from the reader. Definitely a great read and I will be checking out this author again in the future!

In honor of Jools Sinclair's blog tour she's giving one lucky commenter an eBook copy of her novella '44'. To enter simply leave a comment on this post with a valid email address where you can be reached should you win. For more rules please see below.

Rules:
-Be a GFC Follower
-Leave a comment with your email address
-Contest ends June 1, 2011 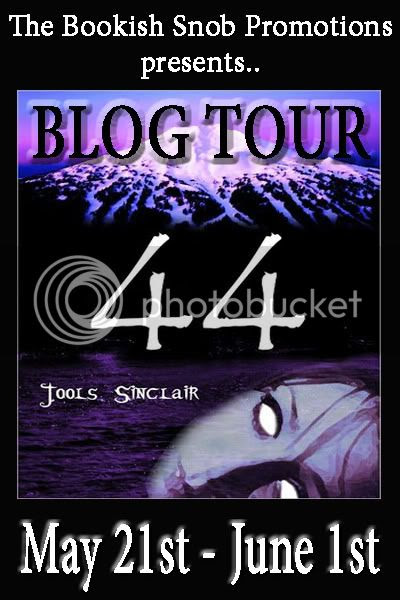 Be sure to visit the next stop on this blog tour at:
The Wormhole
Posted by Wenj at 12:00 PM

Wow, great review hon. I never heard of this author, but I will keep my eyes peeled for her. I am so with you when you said you are leaving it a little vague, same thing happens to me. When I come across books that have that "Oh my God" ending, I skimp with my review because one tiny bit of info can give it away LOL! Nonetheless this is a great review, I am definitely intrigued. Count me in. Thank you hon :)

Hi, Wenj!
Just a quick note to thank you so much for your review AND for hosting the giveaway! I appreciate it very much! Your blog is fabulous and it's so much fun to be a part of it!
Thanks again, :)
Jools

Great review! I'd love to win.
I am a GFC follower- Krysta Banco

Great review. Sounds like a really good mystery and suspense. I would love to read it. Please enter me in contest. Tore923@aol.com

Thisn is the first I've heard about 44. Sounds unusually dark for a YA, dark, but intersting.

This sounds like a really interesting book, and I would love to read it! Thanks for a great review and a great giveaway :)
I am a GFC follower :)
jwitt33 at live dot com

Whoa. That is one freaky cover. But thanks for the giveawy :)

Thanks for the giveaway
jenhedger at hotmail dot com